Join Date: Apr 2008
Location:
Posts: 1,190
For those who watch it, new series of Top Gear starts this Sunday and for this episode I have to watch it (those who know what I do understand!):


Top Gear skids, roars and explodes its way back on to the TV with a brand new series.


It starts with an extraordinary race as Jeremy Clarkson, Richard Hammond and James May set out to discover what Top Gear might have been like 60 years ago. To this end, James grabs himself a gorgeous old Jaguar XK120 sports car while Richard chooses to torture himself on the brutal but rather fantastically named Vincent Black Shadow motorbike. Meanwhile, in an almost unprecedented move, Jeremy decides to take the train. But not just any old train; he's on the footplate of the Tornado, a brand new steam train built to the original blueprints used to create some of Britain's finest locomotives back in the heyday of the railways.


Jeremy has to feed the boiler with a constant supply of coal, without which the whole train will grind to a halt. The challenge behind this race is simple - the first one to get from London to Edinburgh is the winner - but what happens along the way adds up to one of Top Gear's most incredible and epic races to date. 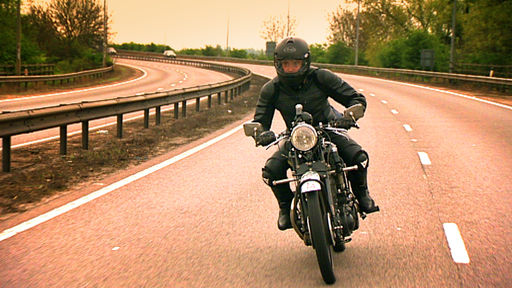 
Join Date: Mar 2008
Location: Four Oaks
Posts: 2,364
The XK is from someone in the next road to me.
It sounds fabulous when pulling away at junctios,islands etc.
Bet he wishes he had a C-Max too though


Join Date: May 2008
Location: Peterborough
Posts: 336
HAHA wet myself when stig removed his helmet and MS was sat there. Was he the only one who Ferrari would allow to drive there car?
http://i170.photobucket.com/albums/u...yb5/LazyB2.jpg
lazyb is offline
Quote Quick Reply